This was more about the Ninja Turtle bandanna than the milkshake itself, which works with any green coloured milkshake or smoothie.

I could talk for hours about late 80s/early 90s cartoons (no, really) and I was definitely pleased when the Teenage Mutant Hero Turtles got a revamp as it made them popular with another generation of children – perfect for me when I was making drinks for a 6 year old’s birthday party.  He was having 3 friends over for a birthday tea, so I decided to turn each of their shakes in Raphael, Donatello, Leonardo and Michaelangelo.

First, choose your glasses. Mine are 400ml Sundae glasses, not ideal for a children’s party on account of them being not only massive but breakable too, but I was going for presentation over practicality on this occasion, as you can tell.

Measure around the top with a strip of paper so you get the perfect fit, then cut out a strip from coloured card – don’t forget to add bumps for the eyes!  Cut eyes out of white card or paper, and glue into place on the coloured card.  If you want to get fancy go round the edges with a black Sharpie pen.  It helps to make the design stand out, and makes them look much like the cartoon version (from the 80s, obviously).  Join up the strip with sticky tape and place it around the glass.  For a totally awesome bandanna don’t forget to cut out a knot (and the bits that resemble bunny ears) and stick it to the back.

The milkshake was mint flavour for this, as it really only works with something green.  For the actual shake I blended milk, vanilla and mint ice cream, with a dash of green food colouring and Peppermint extra for the flavour.  You can use mint ice cream, but it can be hard to find actual mint rather than mint-choc-chip.  You don’t want too much chocolate in there or the green isn’t as vivid (and you don’t want to use too much food colouring as a) it impairs the flavour and b) you’ll have super-hyper kids to contend with).  I did put a blob of chocolate sauce at the bottom of each glass though, so after the initial ‘wow factor’ of the milkshake they can be stirred up to make a chocolate & mint flavour, which is much nicer anyway.

To top it all off I added a pile of squirty cream, a sprinkling of green sugar, and some pistachio meringue pieces (they were the only green toppings I had in the cupboard at the time!) but you can use anything for this.  Chocolate sprinkles would probably taste nicer, or use a green ice cream sauce if you can find one, for that like, totally Turtle Power look, dude.  If I make this again I’ll include some better step-by-step instructions on how to do the bandanna – let me know what you think in the comments section.  Cowabunga dudes!  R x

People are talking about:

There was an error retrieving images from Instagram. An attempt will be remade in a few minutes. 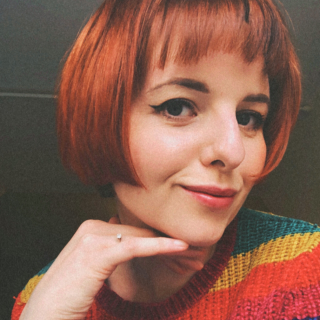 I love to make, draw, and create. Nothing makes me happier than mess, glitter, and adding a touch of colour to anything I can get my sticky fingers on.